After 36 years, in 2020 we cancelled our annual Puppet Animation Festival due to the ever-increasing spread of coronavirus across the UK.

As a team, we have sorely missed presenting the festival this Easter, bringing puppetry performances, workshops and animated films to children and families across Scotland and the North of England. During our time working from home and keeping up social distancing measures, we began to reminisce on the last five years of the festival programme.

We have been in touch with companies who have been toured with us for several years and presented unforgettable events. We would like to take a walk down memory lane with you and share some of these memories. To begin, we have selected one event for each year to reminisce and asked the company to share their favourite memory.

Keep an eye on our social media over the coming weeks as we ask artists who have presented work as part of the festival to relive memories with us. Share your experiences of attending the Puppet Animation Festival by posting and tagging us too.

We are already looking forward to bringing puppetry performances, workshops and animated films back to a venue near you in 2021. 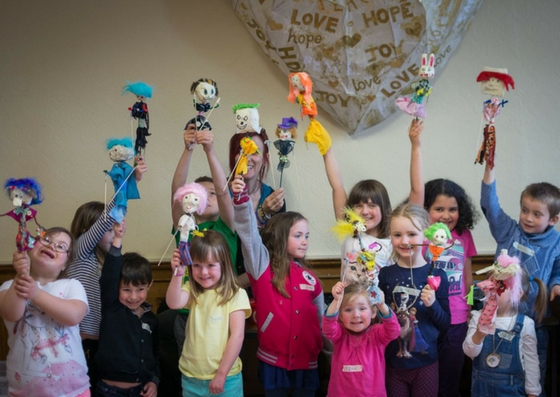 “My experience of presenting my puppet making workshops with PAF over the past 10 years has always been a really positive experience. From the very first email inviting us to put in a proposal for the festival, right the way through the event and into the post-evaluation period, all members of PAF staff are always there to help answer questions and fix any mishaps along the way! It has been a supportive and accommodating organization to be involved with, and the enthusiasm and dedication they all put into the event are what makes it such a pleasure to return year after year.
I especially love when generations of families come along to the workshops. I love seeing the kids reactions when the parents (especially dad’s!) who may not normally engage in creative activities, really relax into it and make elephants in tutus and princess ninja kittens! Also, grandparents joining in and getting creative, mingling with children from other families, sharing stories and conversations, and always lots of laughing! It is a real delight to be involved in such a fantastic event and to be able to facilitate and encourage all those brilliant imaginations to come to life.”
– Donna Owens
Image: Puppet Animation Festival 2015, MAKE ‘n’ TAKE PUPPET Workshop by Puppet-Stew

The Wonderful World of Lapin by Le Petit Monde

“It has always been a pleasure to perform as part of Puppet Animation Festival, from the very start. From super small Scottish community halls – where the village phone box is the only means of communication to the outside world – to fully equipped theatre venues, each tour has been a learning experience in which I have felt supported and that helped me to grow as an artist.

I have a few fond memories but one of the most heartwarming in regards to my work is captured in Andy Catlin’s photos. The children’s faces are such a delight… 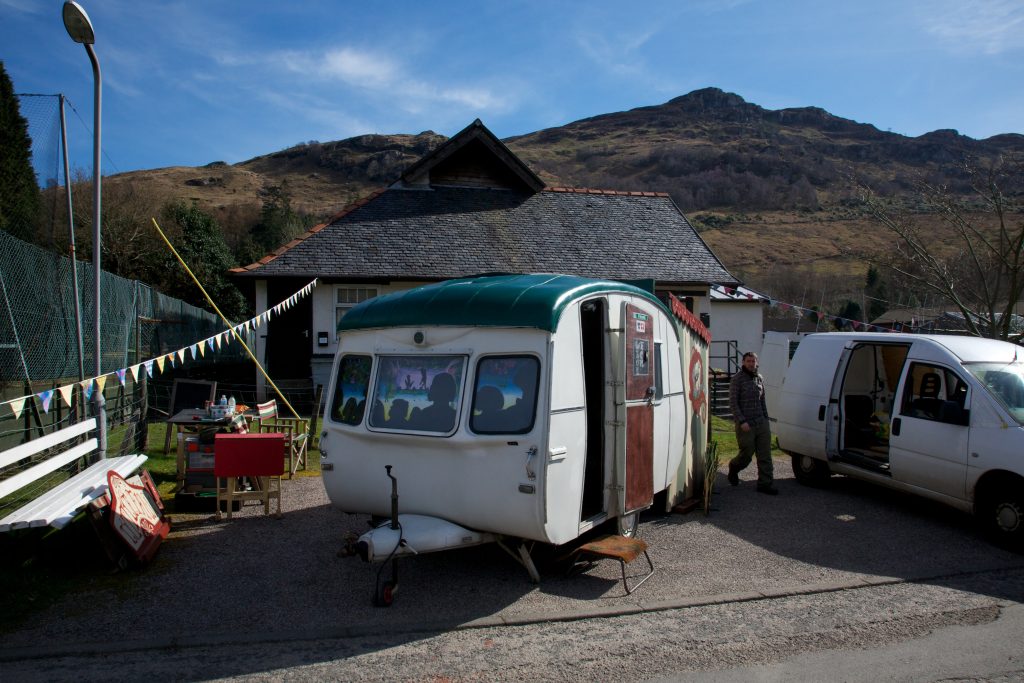 “I have been performing annually in PAF since 2004. It has been a fantastic experience each year. Taking work into both urban and rural communities all over Scotland has proved a wonderful way to learn about our artform and its magical appeal to young and old.
The wee boat to Easdale with my Flea Circus in 2017 was a memorable trip for all the right reasons. A small but perfectly formed audience, plus great hospitality either side of the performance. We renamed the island ‘Fleasdale’ just for the day.”
– Shane Connolly
Image: Puppet Animation Festival 2017, LITTLE RED by Sokobauno Puppet & Object Theatre 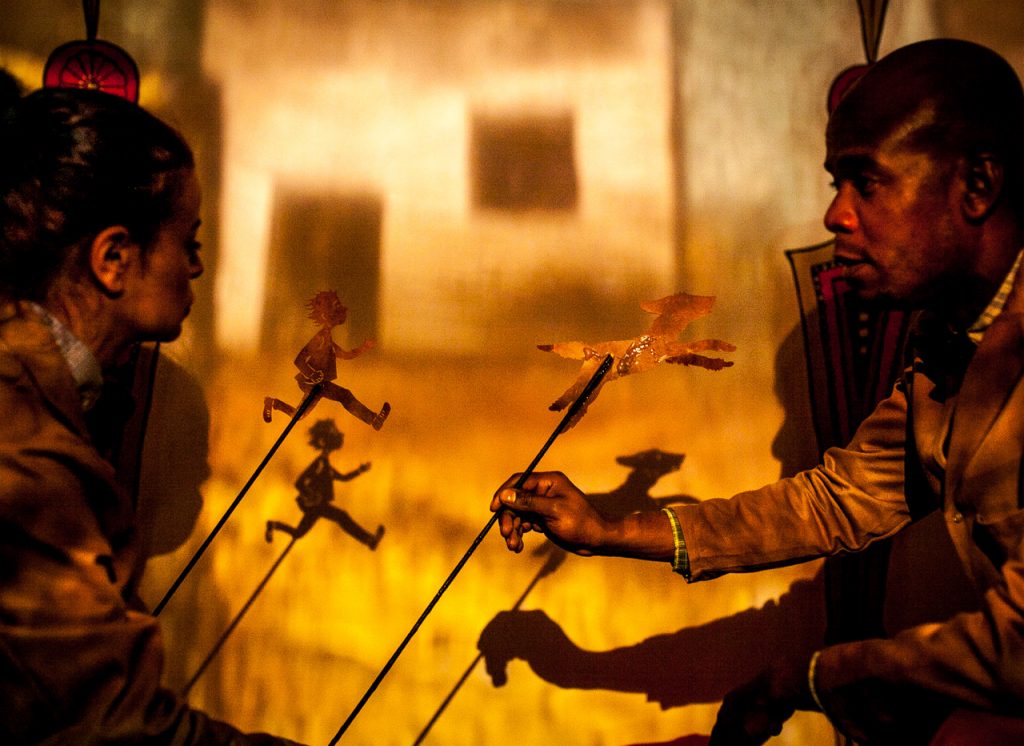 “Driving to Raasay with the two Jordanian performers and Rhazan their company manager was quite an experience. They had joined us for a co-production Vision Mechanics had co-ordinated with The Hiya Cultural centre in Oman and the British Council.

Our arrival on the island was the beginning of a wildly beautiful day with the sun bouncing off the water and the brown and purple hills of Skye framed in silhouette.

It was so utterly different from the burnt Jordanian desert, the performers were enraptured. Bundled in scarves, hats, blankets and duvets they stood on the pier and took pictures of each.

I was watching and to see their joy at all this natural beauty opens your eyes to the amazing landscape and the far-flung communities we are privileged to tour to.” 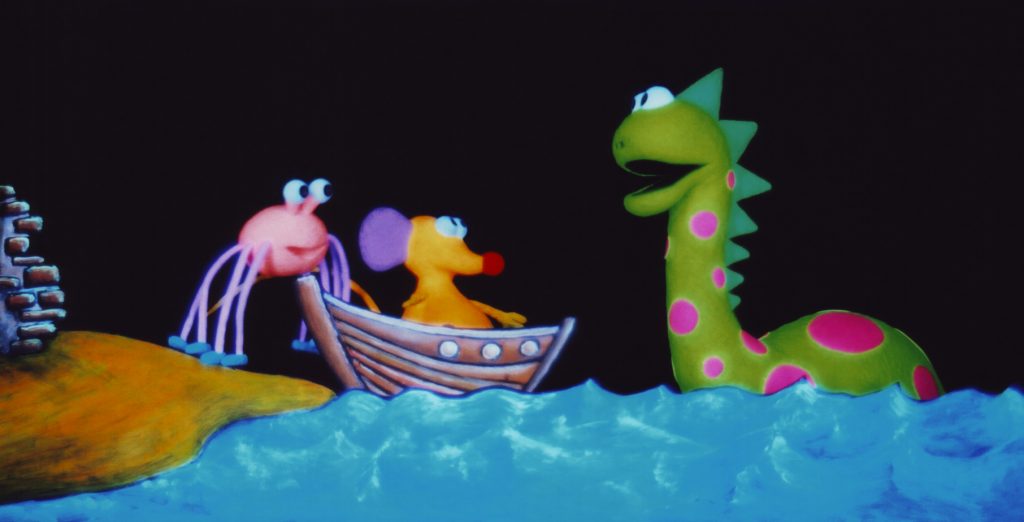 “The great thing about the Puppet Animation Festival is that it connects puppeteers with new people and places. It has introduced me to many professional venues across Scotland, helping me to present my work to a wider audience – not just during the Festival itself, but generally. There’s nothing more exciting than touring to a part of the country you’ve never been to before, an unusual venue, or one that seems perfect for a particular show.

The Festival has given me many lasting memories of all these opportunities so it seems unfair to single out one fondest moment! Rural touring has been a consistent highlight, islands being the crowning glory.

My first ever Festival in 2003 gave me the chance to take Oscar & the Deep-sea Pearl to the Isle of Coll. It was, at that time, the most remote and adventurous destination I’d been to. I remember my initial impressions from the boat as the rounded rocks of the island’s barren east coast appeared as a thin line out of the mysterious void: “Oh my goodness, I’m going to be spending the next two days living on a rock in the middle of the sea!” Unlikely as it seemed, that rock was something of a paradise and on it lived two dozen children, eagerly waiting to see my puppet show!”

We have presented Clydebuilt Puppet Theatre every year at the festival for the last 33 years. This is the first year that Steve & Leigh will not be presenting work this Easter. We look forward to them presenting again in 2021. 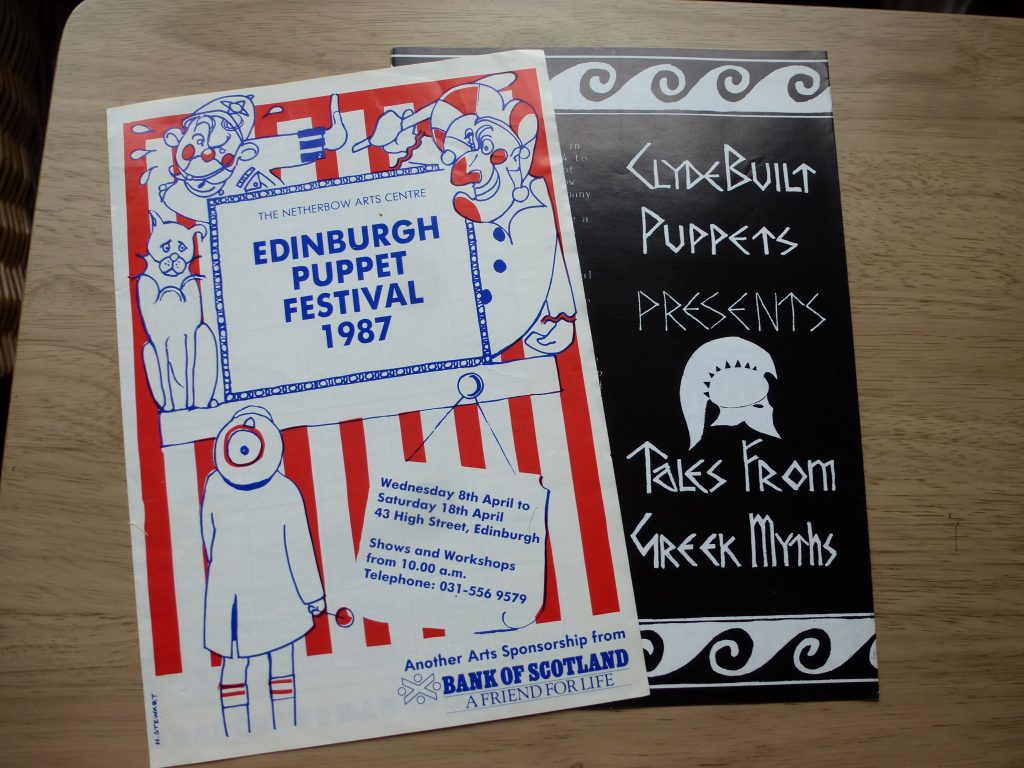 “Clydebuilt sprang into life when Steve Smart and Leigh McCalister met at Puppet Animation Festival in 1985.

Fast forward to 1987 when we got married in the middle of the puppet festival and also did our first Clydebuilt shows at the Netherbow. We were very ambitious – producing Tales of Greek Myths (PANDORA’S BOX) with 15 Life-Sized Rod Puppets and a Shadow production of PERSEUS AND MEDUSA. In those days we didn’t think about the practicalities. We lived in Glasgow, our fellow puppeteer Peter lived in Edinburgh. We didn’t have any transport and travelled with these large Rod Puppets by train. We didn’t have a rehearsal space and got the use of an old church at night. It was far too small and we did the shadow sequences in the foyer with the Bus Stop queue outside as our first audience.

Over the last 33 years, we have so many good memories. As always the support and fun of working Puppet Animation Festival Team – from Donald Smith to Simon Hart and all the admin staff over the years.”