Applications are now live for our annual Creative Fund! Visit our Jobs & Opportunities page to find out more about how to apply. Please note that the guidelines for this fund were slightly amended on 24 June – for the most up-to-date version of the guidelines please visit the jobs link above.

Scottish-based artists of whatever discipline can apply to our Creative Fund to explore elements of their working practices which relate to puppetry, object manipulation, visual theatre and animated film.

Our awards enable successful applicants to use specific, time-limited research and development to explore imaginative and compelling new creative ideas which have not yet seen the light of day. Artists can also apply for support to develop new technical skills and expertise.

In 2020 we made the following awards:

THE CULT OF THE DEER MOTHER Megahertz in association with Feral

A visual theatre production for all ages, celebrating female reindeer farmers and ancient solstice rituals. A story told by an intergenerational cast of women, through intimate storytelling, puppetry, aerial circus and psychedelic music.

I will be building a multi-plane for stop frame animation. Experimenting with 2D image making and lighting states to learn the set-ups strengths and limitations. The knowledge gained from this exploration will have a direct impact upon my planning and storyboarding for several future projects with Swallow the Sea Caravan Theatre, Rural Academy Theatrer, Golden Hour Productions and Norwich Puppet Theatre.

An object manipulation piece about the magnificence of time and the difficult feelings that come from its transience. We will be using micro-cinema techniques of miniaturising the set sitting an entire world onto a table top which will then be filmed. We are passionate about this idea as a move away from narrative-led theatre towards an approach where a combination of live visual theatre, film and music come together to explore something that’s beyond story.

THE WALL DOG Josephine Self

The award we received from Puppet Animation Scotland will allow us to develop a new stop motion animation film, ‘The Wall Dog’. It will tell the story of Dog 9, a guard dog stationed within the death strip of the Berlin Wall. With the award, we will commission a Dog 9 puppet prototype.

In 2019 we made the following awards:

This funding will enable me to work with playwright Will Gore and visual theatre maker Ross MacKay. Together we will start to research and develop a new small-scale show for seven to eleven-year-old children that is based on the true story. Using the experience of a close family member – a French Jew who, as a child, was forced to flee his home in Paris during the Second World War – we will explore the experiences and emotions of a seven-year-old boy who is forced to leave his home as war overwhelms his city with only his pet canary for company.

We will work with leading puppeteer Gavin Glover, exploring the possibility of puppetry elements in our forthcoming production Strange Tales based on some Chinese ghost stories by Pu Songling, adapted and directed by Pauline Lockhart and Ben Harrison. We will explore with Gavin how to use puppetry to play with scale, to create monsters, combat scenes with gruesome deaths, and combine puppetry elements with both illusion and projector mapping and video projection. We seek to insert puppetry in the moments where it can achieve effects beyond the scope of human actors, design, illusion or video.

I am looking forward to developing my self-taught 3D animation skills. Peer-recommended Cinema 4D training in London will provide me with expertise to take my practice in new directions. Once I feel confident in using this knowledge, I will work outdoors in the forests of my local Cairngorms National Park, developing film around the concept of connecting various physical movements and activities of animals, my body and other materials though kinetic, sculptural interactions.

LA CEREMONIE Tortoise in a Nutshell

We are pleased to have received a Creative Fund award and will use it to collaborate with leading French puppetry company Collectif AÏE AÏE AÏE to begin to develop a new visual theatre piece for all the senses. In a rite of observance, join a troupe of ceremonialists as they battle to showcase the meaning and extravagance of ritual, through a riot of colour, music and objects. We look forward to presenting these initial explorations during the MANIPULATE Festival 2020.

In 2018 we made the following awards:

I plan to spend five days working with experienced story-teller and puppeteer Sylvia Troon to extend further my puppetry making and manipulation skills, with a particular focus on creating accessible and robust puppet-making templates, ideas and workshops programmes for use by children in schools and community settings.

I intend to use money generously awarded to me from Puppet Animation Scotland’s creative fund to have time to dedicate myself to developing a short, one-man show that explores the subject of becoming a father for the first time. The show will be part narrative storytelling, with elements of live stop-motion woven throughout it.

Al Seed will use the opportunity of the Creative Fund to further his collaboration with designer, Kai Fischer. During the project Al and Kai will develop the visual elements – set, lights, props and special effects – for an intended future show with the working title, ‘The Nightmares of Joseph Stalin’. By the end of the project they will have defined the physical world of the show and will be in a position to move towards full production.

This is a new visual theatre production in development which explores the relationship between a little girl and unrelated adult man, both fans of the cartoon My Little Pony: Friendship is Magic. The show will explore fandom, how we connect to stories and gender norms to ask why it is taboo for a grow man to have the same interests as a little girl. Puppet Animation Scotland’s Creative Fund will support us to experiment with micro cinema and object manipulation as we develop the visual and design elements of the show alongside the story.

Since our first Creative Fund call-out in 2005, Puppet Animation Scotland has awarded over £300,000 to more than 100 Scottish-based puppets, animators and visual theatre artist, providing the resources and time for them to create great work and nurture their technical skills and creative ambition. Read more below about a few of these artistic journeys.

The Creative Fund supported an initial research and development process of a new visual theatre show for young people which evolved into At A Stretch, a LGBRQIA+ love story for children and their adults.

Touring extensively through Scotland and winning an Edinburgh Festival Fringe 2017 Three Weeks Editor’s Award, the piece combined physical theatre, clown and object theatre to create a playful, non-verbal show which explored the complexity of human relationships, focusing particularly on same sex relationships, and celebrating how adversity can be overcome through love.

During the development process, the team explored the use of wordless storytelling and imaginative design to create an innovative and engaging piece of work. We wanted to create a visual language which would articulate clearly how relationships form, how bonds are made and how they develop and evolve over time, and how external pressures can stretch them almost to breaking point. 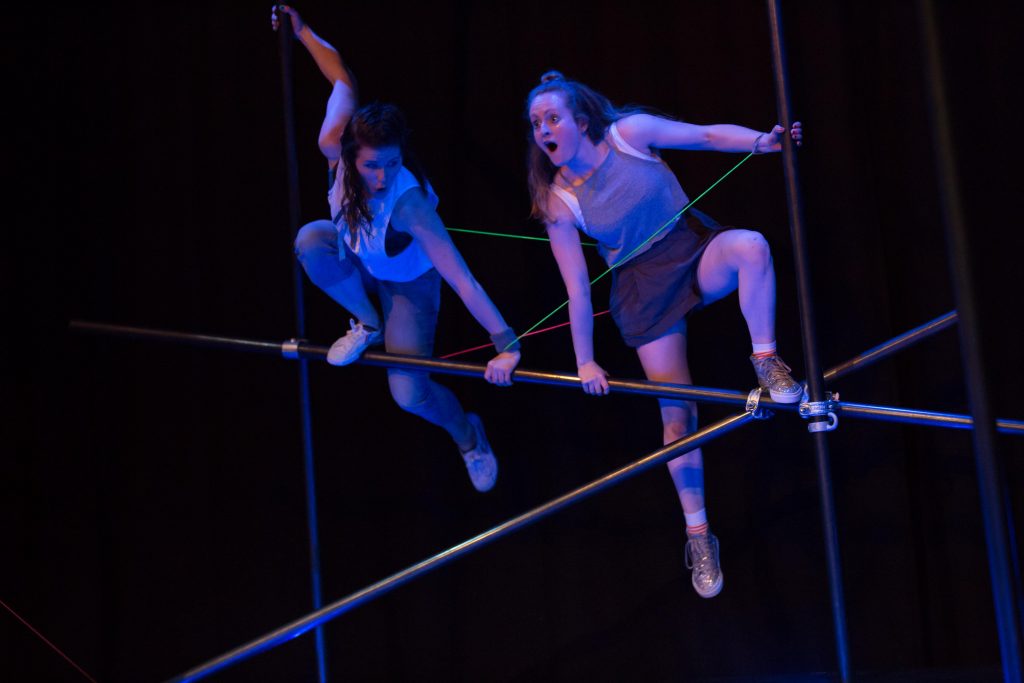 All the projects that I completed in the three years after leaving art school were either been commissions, or schemes set up with tight deadlines and objectives. While I enjoyed these challenges, I longed for some space to explore, experiment, wonder and remind myself how to play. I think in our hyper productive society this is a mode of being that is typically, hugely undervalued. I was tired, worn out and beginning to lose my passion for creating. On my receipt of a Creative Fund award, knowing that my studio rent was taken care of, and that a piece of finished work fitting a specific brief was not expected of me, I began to reinvigorate my relationship with what it means to be creative.

While it turned out that I was not completely able to abandon my desire for a tangible outcome, I did discover a slower, more considered and intuitive way of working that I feel is reflected in the finished film. At only two minutes 30 seconds, there’s a very concentrated magic in the film which I hope will be appreciated at animation festivals. While I believe that it will help keep me in the public eye and further my career, the most important gain over the past five months is a renewed sense of curiosity and passion for the art of animated filmmaking. I am deeply grateful to Puppet Animation Scotland for the such a rewarding and valuable experience.

Postscript: Following its launch in 2015, STEMS was presented with great success at leading animation festivals around the world, winning numerous nominations and prizes including, the Edinburgh International Film Festival’s McLaren Award and being long listed for the 2016 Oscars.

Our company is a multi-award-winning visual theatre company. Since forming in 2010 we have performed extensively throughout the UK and internationally. The Creative Fund has been fundamentally instrumental to our success. It has given us the time and space to explore tiny flashes of ideas. It has allowed us to test and experiment and refine those initial sparks into something more tangible. It has allowed us to see what was working and, perhaps even more importantly, what was not.

The freedom the Creative Fund provides gave us the space to begin to evolve early ideas into our most successful productions: GRIT – Total Theatre and Arches Brick nominated; FERAL – Edinburgh Festival Fringe First & Made in Scotland Showcase Feral; as well as the critically acclaimed, THE LOST THINGS. It has enabled us, with each new production, to become more artistically and strategically ambitious. It has allowed us to develop small sharings of our ideas with venues and producers that subsequently led to new connections and collaborations. These co-producing partnerships have helped us to professionalize and develop from a small company run out of our bedrooms and garden sheds into an organisation whose work has been showcased and celebrated at some of the world’s greatest festivals. 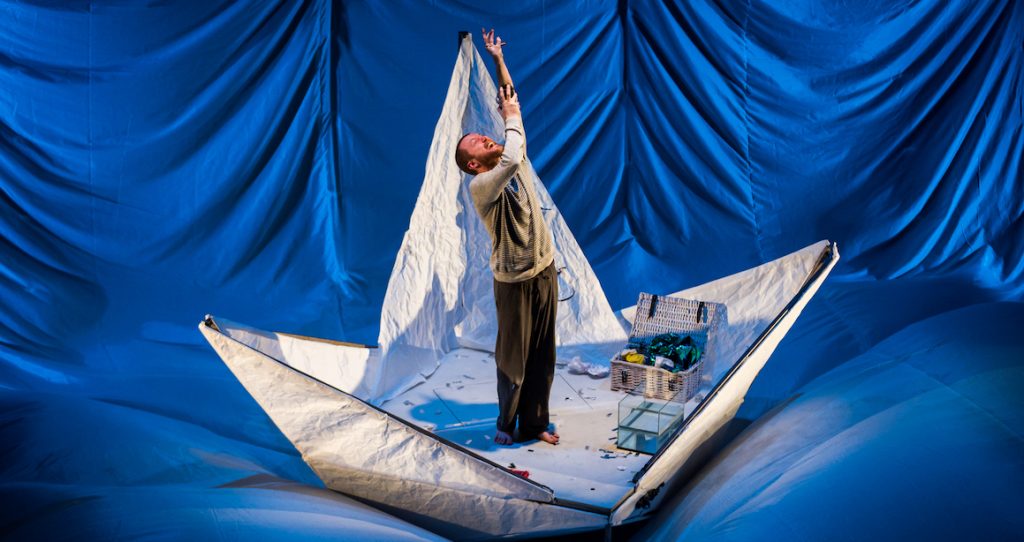